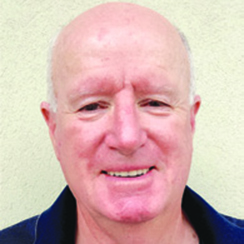 In 1968, Brendan and now wife Denise, seriously connected while working holiday jobs at Erskine House. Brendan as a kitchen hand who thought Denise was the pick of the waitresses on staff.

Brendan was born, grew up, and educated in Melbourne. His career began as a secondary teacher. He found the more he taught Legal Studies the more interested he became in the Law. When Brendan was seconded to teach in Rabaul, Papua New Guinea in 1973, he decided to enrol in a Law degree by correspondence with Queensland University. Teaching in PNG was rewarding because education was considered a privilege and the students were eager to learn. The Tunstalls returned to Australia in 1975 and Brendan taught in Alexandra for three years while continuing his correspondence studies. Denise in the meantime was managing wonderfully with three children under the age of four. However law by correspondence was proving to be a major challenge. He decided to complete his degree at Melbourne University, moved the family to Melbourne, and eventually studied full time to complete his last year of study. He became a specialist in Property law, working as a partner in a Mitcham firm, then with various other firms before semi retiring and conducting his own private practice.

Denise’s parents had a house in Lorne to which they eventually retired in the 1980s. Denise and Brendan spent many happy family holidays with them. In 2010, Denise inherited the house from her mum Molly Smith. In recent years, they have been spending half their time in Lorne. Now being blessed with five grandchildren they have been happy to provide grandparent help so trips to and stays in Melbourne have been more frequent. Particularly so while the grandkids are under school age – we are on duty for the grandchildren. Brendan’s main interests are in the sporting domain. He is one of the 8am swimmers heading out towards the pier, plays competition tennis in Melbourne, doesn’t mind a hit of golf now and again and now loves watching the Lorne Dolphins playing footy. Kicking the footy with the grandchildren is also a favourite. Over the years Brendan has been a member of Lions Clubs and is a former President of Rotary and a Paul Harris Fellow. For the last three years Brendan has been on the Lorne Anglican Uniting Church Parish Council, recently having served as chairperson. He is on the committee of the Men’s Shed. Both he and Denise are VCC Emergency volunteers.

The Tunstalls have travelled overseas on a number of occasions but since retirement have enjoyed travelling around Australia in their caravan. On separate occasions they have driven to the West and up to Broome, to Darwin, Kakadu and the Outback and to the Bundaberg/Noosa region. Brendan is eager to do at least one more trip to the South Australian peninsulas and the south of West Australia.