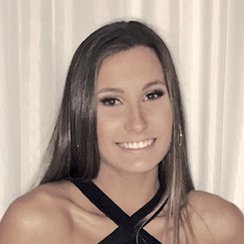 Hannah lives in Melbourne but her family has a holiday house near the Lorne netball courts. From her regular exposure to the game at an early age, grew the passion she has for it today.

Only in year nine, she has already experienced considerable success as a member of winning teams, most recently in the State Titles playing for Elmer (Melbourne Region). Her biggest thrill though she says, was as goalie for the Lorne team that won the 2017 premiership. “It was an amazing feeling. I was so happy. Everyone was so supportive. Lorne hadn’t won a season for over 20 years“.

It’s no wonder she has a strong attachment to the town having spent holidays here since babyhood. She has grown up being part of the Lorne Surf Life Saving Club, first as a nipper then a life saver and this year she is going for her bronze medallion.
Hannah’s dream is to play netball for Australia. Right now she is in trials for the State Netball Under 17 Team. Besides school, she trains five days a week which includes playing in two or three practice games.

Long term plans for life outside netball include a career in health and nutrition. She has lots more netball to play before she has to make those decisions. We wish you luck Hannah and may your dream come true.