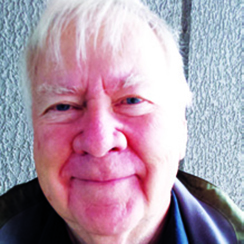 “We love walking on the beach with our two enthusiastic border collies and have come to know everyone with dogs who walk there. We even know their dogs’ names.”

Ian has lived in various parts of Victoria and says he is still a country boy at heart. Ian and his wife, Anne, have been holidaying at Lorne from the time their children were young. So impressed were they by the location, they thought they would like to try living here. They rented a house originally for a year so that Anne, a Psychologist with a practice in Melbourne, was able to start working in Lorne part time. Ian, still on staff at Monash University as Director of the Medical Engineering Centre, came down to Lorne on Fridays for the weekends. Eventually they bought the house they were renting and renovated. Anne tired of commuting to Melbourne transferred her practice to Lorne, working four days a week until retiring last December.

Ian was the first biomedical student at Monash and the first to do a PhD in Medical Engineering. He met Anne whilst they were both at Monash University and in fact were married in the university religious centre. After living and working in Melbourne for many years Ian took up a post doctoral fellowship in Birmingham and then worked in London for six years. During that time Anne trained as an Analytical Psychologist.

On their return to Australia, Ian worked for the Commonwealth Department of Health as head of Medical Devices before eventually returning to work at Monash University. Ian enjoyed teaching but loved research. He says supervising students through their PhDs was a highlight of his career. He also ran a consulting company for the University that included conducting surveys of medical equipment in all Victorian and Western Australian hospitals. This experience is no doubt invaluable for his position on the Lorne Hospital Board.

Ian’s interest in the environment, and particularly in projects that affect Lorne, is useful as President of Friends of Lorne. He would love to see some young people get more involved, especially to help with the website for this organization which has been working for Lorne for 51 years. “We need young people to carry us forward to the future.”

The Browns have two children. Now with a Chinese daughter-in-law their interest in travel will include China more regularly.

They are members of the Book Club and have been involved in Lorne’s Sculpture Biennale.