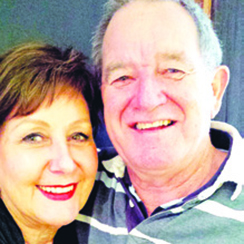 Every winter, Peggy and Ray escape to France to visit their son and his family. He is a Global Director of an Advertising Company based in Paris. They love travel anyway and take these opportunities to tour Europe or go on various cruises, usually with friends or family.

The Sellars were born and educated in Whyalla, SA. After finishing school, Peggy began a career as a hairdresser and Ray as an apprentice with BHP. They married the in 1969. In 1974, they moved to Tom Price, WA, to join the mining industry. They stayed for eight years.

In 1982 they moved to Geelong where Ray started work as a Maintenance Supervisor with Alcoa. Peggy set up a hairdressing business with a partner, in which she was involved until she retired recently.

How did they end up in Lorne? Lorne became a favourite place to visit on weekends. Later on, the family stayed with friends in Wye River. When those friends bought a house in Lorne, they often stayed with them and their love of Lorne grew stronger. Nine years ago, the Sellars had an opportunity to buy here and have been coming at every opportunity since.

Every Christmas and New Year they are joined by their son and his family from Paris and their daughter and her family from Torquay.

In his retirement Ray plays tennis, is a volunteer driver for Vision Australia, enjoys helping out with his three grandchildren, does a little gardening and loves to fish from the Lorne pier – although he admits he doesn’t have much luck with that. He plays the odd game of golf at The Country Club.

Peggy says she loves being retired, cooking, travel, gardening and time with the all grandchildren.