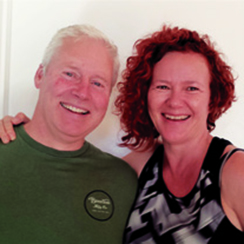 When the Men’s Shedders were grappling with fitting Cockie-proof locks to our garbage bins because of an inefficient template, Tony offered to research a better option. Through his contact Patrick Eijsvogel, he arranged a specialised jig, which has facilitated installation enormously. Just another contribution by someone who loves Lorne and wanting to put something back.

Tony was born and educated in Geelong. He studied surveying at RMIT for a year before deciding it wasn’t for him. His journey after that began with work in the timber industry, before a change to the electrical industry for a cable manufacturer. From there he went to an electrical wholesaler then to an electrical contractor. Twenty years ago he bought part of that business and set up K-Mac Powerheads, supplying Caravan Parks and Marinas with electrical service pillars. Tony’s brother David is now his partner in the business which also employs Tony’s son, Nathan.

Susie was also born and educated in Geelong, studying hairdressing when she finished school. After 10 years in that business she married and had her children. For six years she was an agent for a party plan selling children’s wear. Two years in Malaysia followed. She came home and trained as a Bowen Therapist and practised for 10 years, retiring three years ago. Currently she mixes up her week as a host for an Airbnb in Geelong and works a day or two in Lorne at deluxe.

Tony and Susie have had a Brady Bunch for 12 years. Eleven years ago, they bought a holiday house here and after serious redecoration, have been coming most weekends ever since. With three children each and grandchildren appearing fast, they are extending their accommodation to fit them all. Both have parents in Geelong they like to love and spoil.

I love a jog, a paddle or a surf. Just get me near sand and salt water and I’m happy. Tony is a member of the Aquatic Club, Surf Club, Footy Club, Bowls Club, Country Club and obviously the Men’s Shed. I like to support local associations where and when I can.

Susie’s loves are family, friends and food. She gets her exercise walking the beach, gardening and yoga. She has volunteered with FOPA and was part of the Lorne Community Choir carols last year.

They swooned when I asked about travel and willingly talked about their passion for Italy but they are in agreement, Lorne is the most special place on earth.